I recently spent my evening at a Visible Women Campaign event on ‘Women in Technology’. As a young woman in technology myself, this has been a topic on my mind a lot recently. The above is a quote from a woman asked to contribute to an upcoming book, on Women in Technology.

On my daily commute I read a number of blogs on my playbook. Contrary to what the market and current prices of playbooks say, it’s a highly rewarding experience. Amongst my Google reader feeds are a number of women in tech blogs (most notably Women 2.0). These, along with some women in business blogs, give me a daily dose of what other women are doing. Everyday I’ve got at least one post waiting for me, ready to tell me about the latest feat in technology, from a woman. Add to that people like Sue Black (@dr_black) who was recently identified as one of London’s top 20 most influential tweeters in Technology, the sheer existence of Facebook COO Sheryl Sandberg, the abundance of female social media experts on Google+ (link to my ‘Women in Tech’ circle – or even here) and slideshows like ‘How biology explains the low numbers of women in Computer Science’ (below) and I could be forgiven for thinking that there’s no problem, and should be no problem.

But 1.3bn Google results for ‘women in technology’ would suggest there is. I have to remember than in a class of about 70 Computer Science students, I was one of 3 girls in my year at university. Of the numerous lab assistants we had during my time there (and throughout the entire department) there were 2 female ones. Let’s not even mention the number of female lecturers. My team at work is the anomaly, with only 3 guys in a team of 10. The rest of our technology floor is nearly exclusively male. The same goes for our management committee, although the non-IT departments aren’t any better (that’s another blog post altogether). So it’s fair to say that ‘women in technology’ exist, but aren’t prolific. As one VWCampaign panelist said ‘You’d think, in this day and age, there’d be more women at these kind of meetings’, referring to the management IT meetings she has to attend at work.

I’m not big on playing ‘the blame game’, so I’m not going to name or shame anyone for being the cause of this problem. Men are not the enemy. Neither should we rush to blame governments or even TV shows like ‘Big Bang Theory’ for not portraying female scientists – or emotionally rounded ones. In fact, I noticed on a recent blog post by a woman in our IT department – about getting married and the career implications of changing her name. Surprisingly all the comments and feedback were from males, who had had their wives & friends changing their surnames. All friendly comments; not a chauvinistic remark in sight.

In the last 18 months alone, I’ve seen a number of recruitment drives to redress this balance – by companies wishing to get more females through the door and up the ranks. The Sony ’50/50′ scheme is an example of a ‘positive discrimination’ approach to moving women up. I’ve worked at a number of firms with ‘Female Mentoring’ and ‘Female Fasttrack’ schemes, hoping to pull women up the ranks by any means possible. From what I can see, they’ve had varying success. With any luck Padmasree Warrior and Marissa Mayer  won’t be up there on their own for long. Also, a few bright sparks have realized that not all Women in Technology need to have taken the ‘I studied Computer Science’ route. Codeacademy and a few others are helping non-techie women join the game at a later stage.

Lower down the pipeline BCSWomen put on Ada Lovelace Colloquium days, companies like Google are always on the lookout for female CompScis to scoop up straight from university and there’s some chatter in the UK around changing the curriculum and helping girls engage with IT. Personally, I have a favourite solution: blind interviews. This guy makes a pretty good case for them here – about half way through the post. Imagine a company choosing you without knowing your name, cultural background or even your age. Your demographics don’t factor it – just the quality of your work…

So, for what it’s worth here are my top 3 suggestions:

In the interests of not fully exposing all my ‘women in tech’ knowledge in one go, I’ll stop there. I’ve got a few blog posts left to read before the day is out anyway… 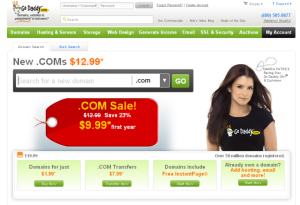 0 thoughts on “No women in technology? You’ve never been to GoDaddy.com!”

Discover Anne-Marie’s latest thoughts, appearances and opinions, covering a variety of crucial topics (including the future of the workplace & women in tech) and some not so crucial ones.